MacKenzie-Childs needed a system to organize and analyze its customer data and move its marketing team in a more data-driven direction. It chose the QuickPivot CDP and has seen measurable results after just one year. Scroll down to continue reading. 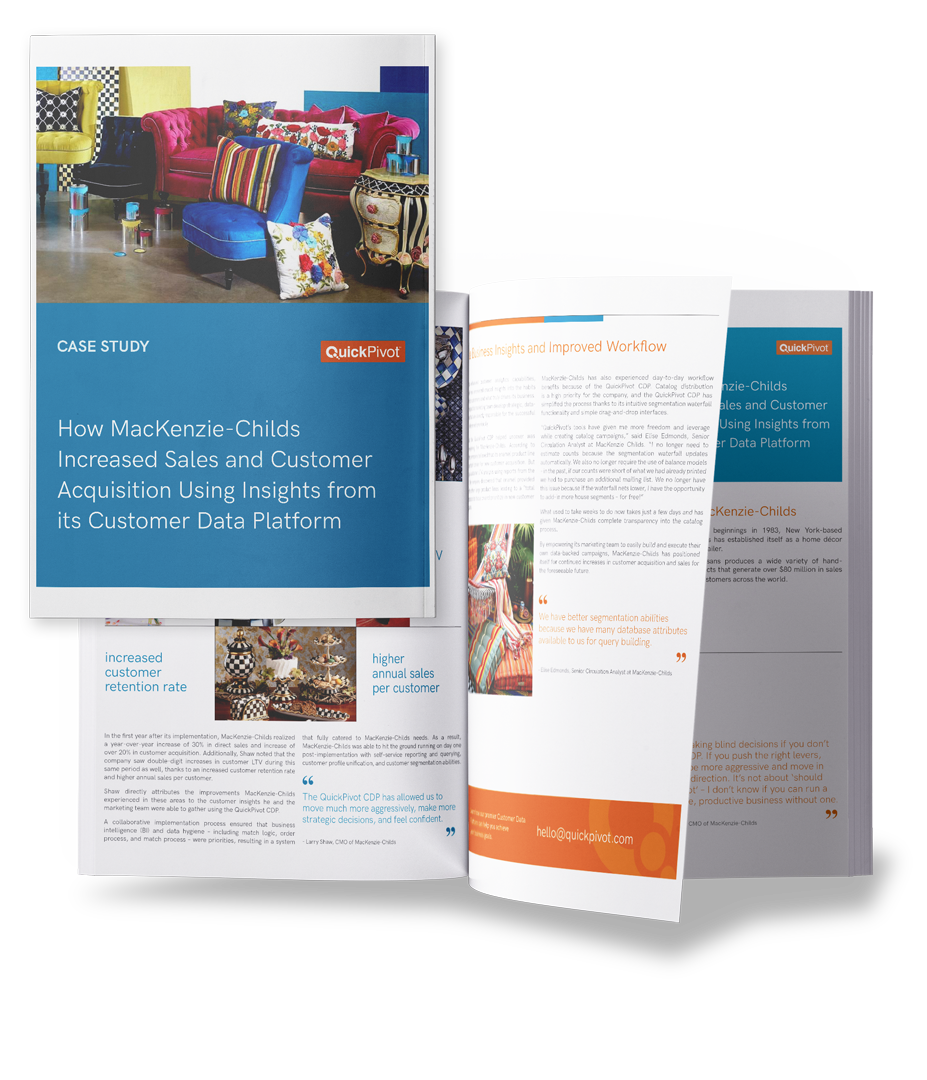 MacKenzie-Childs is a leading home décor retailer in the United States and has been a client of QuickPivot since 2017. MacKenzie-Childs uses the QuickPivot Customer Data Platform (CDP) to consolidate its customer data, analyze that data, and develop its catalog mail plan out of the system.

Larry Shaw, CMO of MacKenzie-Childs, was focused on measuring and improving customer lifetime value (LTV) with his marketing efforts. With QuickPivot in-place, he exceeded his goals and saw an impact on additional KPIs such as direct sales and customer acquisition.

Born of humble beginnings in 1983, New York-based MacKenzie-Childs has today established itself as a leading home furnishing retailer.  Its team of artisans produces a wide variety of hand-decorated products that generate over $80 million in sales annually from customers across the world.

In today’s crowded and ultra-competitive retail world, a data-driven approach to key decision-making is critical for success. Understanding this, MacKenzie-Childs’ evaluated its internal processes to determine where could be more data-driven.  What they concluded was that they needed a clearer view and deeper understanding of its customer base across all its channels, as well as a centralized location for storing and accessing its customer data. Customer profiles were spread across multiple systems, and there was no easy way to analyze existing data, identify customer segments, or determine which product category drove the highest customer LTV.  With these wants and needs in mind, the leadership team set out to find a single technology to address all of them – a big ask given the range of capabilities the company was after. After scouring the marketplace, MacKenzie-Childs determined the QuickPivot CDP was the best fit for their needs.

In the first year after its implementation, MacKenzie-Childs realized a year-over-year increase of 30% in direct sales and increase of over 20% in customer acquisition.  Additionally, Shaw noted that the company saw double-digit increases in customer LTV during this same period as well, thanks to an increased customer retention rate and higher annual sales per customer.

Shaw directly attributes the improvements MacKenzie-Childs experienced in these areas to the customer insights he and the marketing team were able to gather using the QuickPivot CDP.

A collaborative implementation process ensured that business intelligence (BI) and data hygiene – including match logic, order process, and match process – were priorities, resulting in a system that fully catered to MacKenzie-Childs needs. As a result, MacKenzie-Childs was able to hit the ground running on day one post-implementation with self-service reporting and querying, customer profile unification, and customer segmentation abilities.

Powered by its enhanced customer analytics capabilities, MacKenzie-Childs has uncovered crucial insights into the habits and behaviors of its customers and what truly drives its business. This in turn has helped its marketing team develop strategic, data-driven campaigns that are directly responsible for the successful business results referenced previously.

One insight that the QuickPivot CDP helped uncover was particularly eye-opening for MacKenzie-Childs. According to Shaw, for years the company believed that its enamel product line was its most important driver for new customer acquisition. But after performing a customer LTV analysis using reports from the QuickPivot CDP, the company discovered that enamel provided the lowest LTV among its product lines, leading to a “total shift” regarding what product lines to focus on and prioritize, according to Shaw. 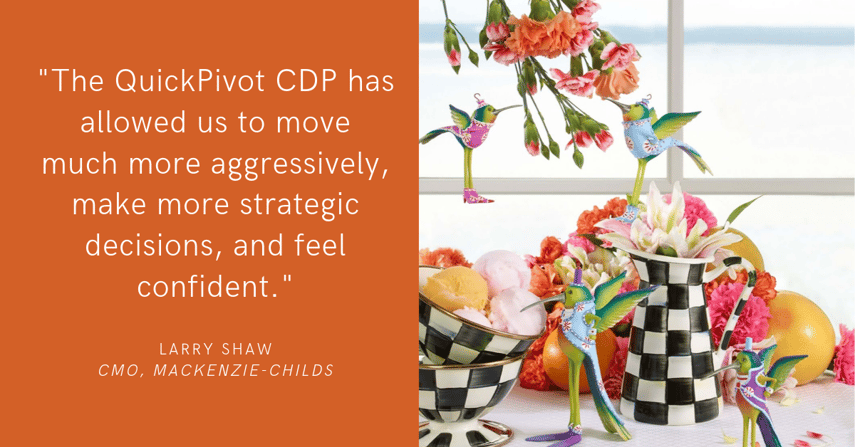 MacKenzie-Childs has also experienced day-to-day workflow benefits because of the QuickPivot CDP. Catalog distribution is a high priority for the company, and the QuickPivot CDP has simplified the process thanks to its intuitive segmentation waterfall functionality and simple drag-and-drop interfaces.

“QuickPivot’s tools have given me more freedom and leverage while creating catalog campaigns,” said Elise Edmonds, Senior Circulation Analyst at MacKenzie Childs. “I no longer need to estimate counts because the segmentation waterfall updates automatically. We also no longer require the use of balance models – in the past, if our counts were short of what we had already printed we had to purchase an additional mailing list. We no longer have this issue because if the waterfall nets lower, I have the opportunity to add-in more house segments – for free!”

What used to take weeks to do now takes just a few days and has given MacKenzie-Childs complete transparency into the catalog process.

By empowering its marketing team to easily build and execute their own data-backed campaigns, MacKenzie-Childs has positioned itself for continued increases in customer acquisition and sales for the foreseeable future.

“You’re making blind decisions if you don’t have a CDP. If you push the right levers, you can be more aggressive and move in the right direction. It’s not about ‘should you or not’ – I don’t know if you can run a profitable, productive business without one.” 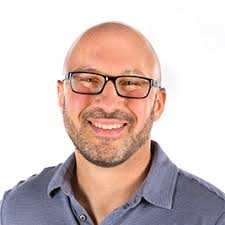